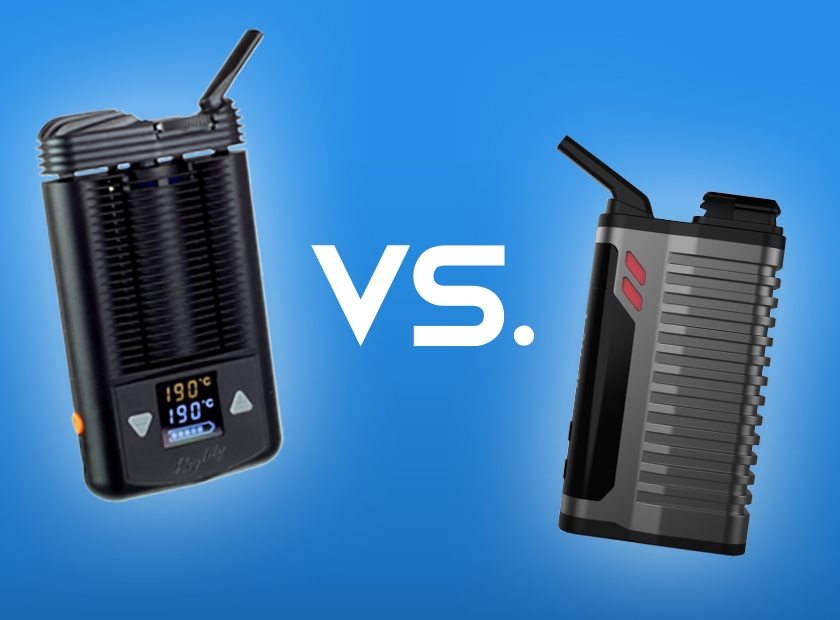 Fenix 2.0. and Mighty are two very popular and strong portable vaporizers. Similar in size, shape, battery life, and many other things. So let's break them down into sections and figure out their pros and cons.

As very well known Mighty was made by the German company Storz and Bickel, which has been known for very good portable and desktop vaporizers. German quality makes a difference. While Fenix 2.0. has been made by the company Weecke, which also has many years of experience and quite a few vaporizers to show. Both Fenix 2.0. and Mighty is nicely designed and have similar specifications, but they differ quite a lot in the price.

These two are very similar in size, the Fenix is 6 x 11 x 3 cm, and the Mighty is 8 x 14 x 3 cm, so the Mighty is slightly larger. But there is a good reason for that, more in the »Battery« section. Also, the weight of these is very similar the Mighty is 230 g and the Fenix 2.0. is 232 g. So these are not your typical portable, pocket-sized vaporizers.

The temperature range on the Mighty is from 60 - 210°C, while on the Fenix 2.0. it's 160 – 220°C, so Mighty does have a bigger range but the both go up quite a lot and this means they both can evaporate herbs, waxes, and oils. The heat-up time with the Mighty is around 60 second, and with the Fenix is around 30 seconds.

The chamber capacity doesn't differ in Mighty and Fenix 2.0., they both pack 0.3 g of dry herbs. They both evaporate dry herbs, and with additional steel pods also wax and oils.

Fenix 2.0. has the 4th generation of air heating technology, convection. Which means that only hot air comes in contact with the herbs, wax, oil and this eliminates the chance for the herbs to burn and give out a bad taste. And also it means that the herbs get heated up evenly throughout the whole chamber, not only on the sides of the chamber. This also means that you dont need to stir the herbs as often as you would otherwise.

Both Fenix 2.0. and the Mighty provides clear, fresh, flavorful vapor. With the tweaking of the temperature, they can also provide quite dense vapor too if that's what you're searching for. Because of Fenix 2.0. has an isolated air patch way the herbs only mix with fresh air and nothing else. Both of them cool down the vapor nicely before it reaches the mouthpiece.

Both Fenix 20.0. and Mighty is made out of quality materials and by really good companies. But the Fenix 2.0. may be a bit better here. The casing is made out of metal and it gives it a sleek look. The heating chamber is titanium and its also replaceable, so if you want you can always replace it with a new one. And the mouthpiece is made out of quality zirconium This help out in the cooling of the vapor.

Mighty has two built-in batteries that combined make up for 5400 mAh of capacity. Which means it can work up to 90 minutes. The charging time is around 120 minutes.

While Fenix 2.0. has a 4400 mAh battery. It meant ist battery life is around 75 minutes, and it charges up in around 150 minutes. Neither of these vaporizers has replaceable batteries. So if you like to take your vaporizer around make sure it's fully charged or that you take the charger with you. Also, none of them have a pass-through charging function.

Both of these devices are very good and quality made. So here it depends also on how much budget you have. Because the Mighty can be up to 300€ while the Fenix 2.0. is around 150€. Because they are so similar this is a big factor here. But the Fenix is a bit smaller, heats up faster and has convection type of heating. The Mighty has a bigger battery capacity. So if that's a very important factor take the Mighty.

Both the Mighty and the Fenix 2.0. have 2 years of warranty.

We hope we helped you out in deciding between these two very good portable vaporizers.

"You can pay with us a fast and uncomplicated method of Bank Transfer. For this, we accept payment with EUR (€) and GBP (£)."